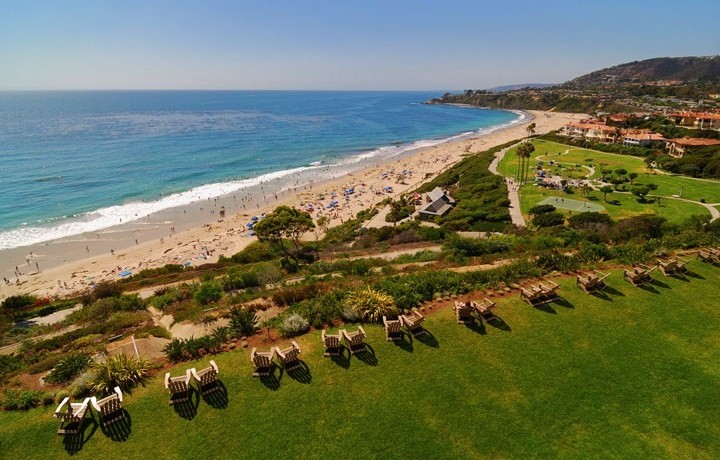 Dana Point is one of Orange County's oldest cities located along the coast of southern California. Dana Point was once known for having large surf, nicknaming the city 'Killer Dana' by surfers in the 1970s. Now there is a beautiful harbor where the large waves used to crash, enjoyed throughout the year by residents. Dana Point is now known for having a boat harbor and exceptional state parks like Doheny State Park which is located on the coast. The area of Monarch Beach in Dana Point has extraordinary ocean view residences and impeccably crafted luxury homes that offer amenity-rich, resort-style living. The area is also known for having world-renowned hotels like The Monarch Beach Resort and The Ritz Carlton.  The city is characterized by nearly seven miles of prominent coastal bluffs and rolling hills along the Pacific Ocean. The most noteworthy of these bluffs is a promontory known as the “Headlands” which overlooks Dana Point Harbor. Recently that area has been developed into a luxury home community named The Strand At Headlands with homes ranging into the multi million range. The city is a great option for home buyers looking for a coastal community in southern California that won't cost them an arm and a leg. Dana Point and San Clemente are both considered to be the cheaper coastal cities in Orange County to buy a home. Below are all the homes currently for sale in Dana Point.

Dana Point has 5 different areas which are named Lantern Village, Del Obispo, Capistrano Beach, Dana Hills, and Monarch Beach. Below you can see a basic description for each area. To view homes for sale in each area click on they're names below.

Lantern Village
The Lantern Village is one of the oldest areas of Dana Point. This is considered the downtown part of the city. Many of the streets are named a color followed by 'lantern', like sliver lantern or blue lantern. This is because colored lanterns were used by ships 200 years ago to advertise their fares when pulled into the Dana Point natural harbor. The area has many triplexes and four-plexes as well as single family homes and condos. There are also a few ocean view gated communities like Waterford Pointe, and Lantern Bay Estates.

Del Obispo
This area of Dana Point is located along the San Juan Creek river which spills out into the pacific ocean. This area of the city has traditional sized homes with wide streets. Most of the homes in this area were built in the 1960's and 80's. This area is also where the Dana Point harbor and Doheny State Beach/Park is located. There are both single family homes and condos available in Del Obispo.

Capistrano Beach
The Capistrano Beach area is another of the oldest areas in Dana Point. Home development in this area began as late as 1920's. There is a wide array of homes in this area including, single family homes, condos, beach bungalows, triplexes, multi-unit buildings, and even mansions. One of Dana Point's notable bluffs is located in Capistrano Beach. Large estate style homes are build along the bluff to take advantage of the great ocean, Catalina Island, and harbor views.

Dana Hills
The area of Dana Hills is the area farthest to the east in the city. This area is known for being the family oriented part of the city and is also where the Dana Point High School is located. Homes in this area were mostly built in the 1970s and 80s. There are both single family homes and condos available in Dana Hills.

Contact us today to find out how we can be of assistance to you!

Walk out on to the sand from this stylish and contemporary oceanfront home in the private, gated community of The Strand. Epitomizing seaside living at its most sophistic...

When only the best is what you desire, your search for the ultimate seaside sanctuary will end at this sublime custom estate at The Strand at Headlands in Dana Point. Ind...

Crowning the very upper echelon of Orange County’s unparalleled ocean-view estate occupies a league of its own at The Strand at Headlands in Dana Point. The modern coasta...

Spectacular and elegant new home is scheduled for completion in July 2022 at The Strand at Headlands, one of the most prestigious gated oceanfront communities in Southern...

Truly an "incredible" opportunity!! A most discerning purchaser must consider!! NEW CONSTRUCTION! Purchaser can still modify floorplan and make all selections! Completion...

Elevate your lifestyle to impressive new heights at this stunning custom estate at The Strand at Headlands in Dana Point. Nestled on an elevated homesite of nearly 15,986...

This custom luxury home on the exclusive Capistrano Beach ocean front strand in Dana Point exudes the energy and tranquility of a tropical island paradise. Completed in 2...

This all flat 21,750 sqft parcel represents the opportunity to build your coastal dream estate on one of the few land offerings on the oceanfront and the only one in Mona...

The extraordinary opportunity that you have been waiting for has just arrived behind the guarded entry gates of The Strand at Headlands in Dana Point’s preferred Monarch ...

The extraordinary opportunity that you have been waiting for has just arrived behind the guarded entry gates of The Strand at Headlands in Dana Point’s preferred Monarch ...

Stunning ocean view! Located in beautiful oceanfront Niguel Shores, next door to the Ritz Carlton and one mile to the Dana Point harbor. Within walking distance of the as...

Double your pleasure! Great opportunity to build your dream home. Two side by side ocean/beach front lots(2 APN#s) with approximately 85 feet of frontage. 4 bedroom, 4 ba...

This exquisite, single-level custom home offers magnificent views of the ocean, Catalina Island and the beach coastline. Enter the grounds through a private front gate ...

With spectacular ocean views, a sought-after location on a cul-de-sac street, and city-approved plans for a luxurious custom residence, this coveted homesite is certain t...

Located in the esteemed guard-gated community of The Strand at Headlands, this build-ready parcel with appx. 71' of view frontage sets the stage for the home of your drea...

Located on a prized corner lot, boasting almost a full ½ acre of land, this remodeled and turnkey home is located in the highly sought-after and prestigious, beach-close ...

Ocean and white water view home in exclusive Pointe Monarch community in Dana Point. Experience luxury living in this highly desirable, very hard to come by home in this...

This is your opportunity to purchase one of Monarch Bay's last vintage single-level homes. This property comes complete with full ready to build plans (design, engineerin...

34567 Camino Capistrano is a rarity in this luxury coastal landscape and is the sole bluff top home for sale. Finding a turn-key, premium ocean view, custom beach home is...

Beautifully updated oceanfront duplex. Boasts one of the larger lots in all of Beach Rd. at 8,276 sq.ft right on the sand. Treat yourself to forever, unobstructed panor...

Take your breathe away beachfront home in the guard gated community of Beach Road in Dana Point. It will be hard to leave this 2,354 square foot 5 bed, 4 bath home on on...

A stunning combination of extraordinary coastal elegance, ocean views and unfathomable luxury combine in this exemplary customized estate. Located on the golf course of t...

Based on information from California Regional Multiple Listing Service, Inc. as of . This information is for your personal, non-commercial use and may not be used for any purpose other than to identify prospective properties you may be interested in purchasing. Display of MLS data is usually deemed reliable but is NOT guaranteed accurate by the MLS. Buyers are responsible for verifying the accuracy of all information and should investigate the data themselves or retain appropriate professionals. Information from sources other than the Listing Agent may have been included in the MLS data. Unless otherwise specified in writing, Broker/Agent has not and will not verify any information obtained from other sources. The Broker/Agent providing the information contained herein may or may not have been the Listing and/or Selling Agent.